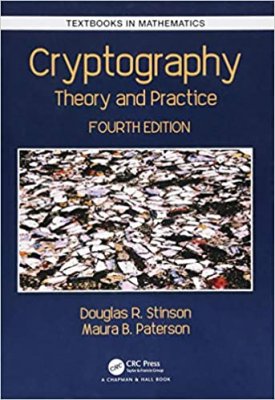 Through three editions, Cryptography: Theory and Practice, has been embraced by instructors and students alike. It offers a comprehensive primer for the subject’s fundamentals while presenting the most current advances in cryptography. The authors offer comprehensive, in-depth treatment of the methods and protocols that are vital to safeguarding the seemingly infinite and increasing amount of information circulating around the world. Key Features of the Fourth Edition: New chapter on the exciting, emerging new area of post-quantum cryptography (Chapter 9). New high-level, nontechnical overview of the goals and tools of cryptography (Chapter 1). New mathematical appendix that summarizes definitions and main results on number theory and algebra (Appendix A). An expanded treatment of stream ciphers, including common design techniques along with coverage of Trivium. Interesting attacks on cryptosystems, including: padding oracle attack correlation attacks and algebraic attacks on stream ciphers attack on the DUAL-EC random bit generator that makes use of a trapdoor. A treatment of the sponge construction for hash functions and its use in the new SHA-3 hash standard. Methods of key distribution in sensor networks. The basics of visual cryptography, allowing a secure method to split a secret visual message into pieces (shares) that can later be combined to reconstruct the secret. The fundamental techniques cryptocurrencies, as used in Bitcoin and blockchain. The basics of the new methods employed in messaging protocols such as Signal, including deniability and Diffie-Hellman key ratcheting.